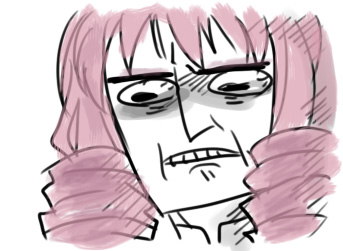 Provided you’re using a real browser like Firefox or Opera, and not some botnet ridden thing like Chrome, this should be painless for you.

If you’re in Chrome, for whatever reason, you’ll have to install an add-on like this one to be able to use RSS feeds easily. The Google made RSS add-on is trash and barely usable.

In your browser just go to an RSS feed, like ours, and set it up accordingly before pressing the “Subscribe” button.

If you’re in Firefox, and clicked through without changing anything you should have a cool thing like this on your bookmark bar, assuming you even have one. In Opera subscribing to a feed forces you to stare at their RSS/mail client, so yeah you’ll see that instead. 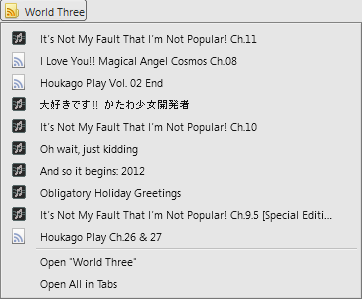 All in all, it’s a fairly painless process and it can be applied to any place that has a RSS feed. ‘Course I personally make fun of Chrome, but I use Google Reader, so I’m a hypocrite.
I also don’t use Safari or the like because I’m a Windows user and Safari is horrible on Windows. Anyway here’s a list of our RSS feeds:

Each release has it’s own feed because we use WordPress, if you want those just click the release you want under “Releases” on the sidebar, then type “/feed” at the end of the URL. A Houkago Play feed would be… [http://world-three.org/tag/houkago-play/feed/]

And here’s a screenshot of my own browser so you can think of bad things to say about me.